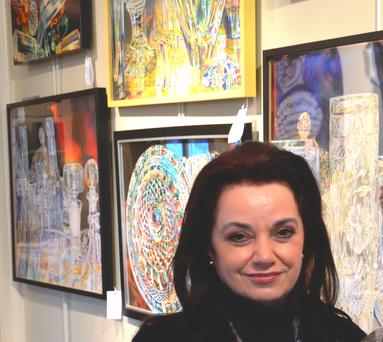 “…A transcendence of time, space, and reminder of why primitive people worshiped the sun with its infinite light refractions.”

“…so beautiful and imaginative – this work moves me like no art I’ve ever experienced in some time.”

These are some of the words written about Carol Scott’s original approach to painting – and rendering in colored pencils – the color spectrum seen in crystal.

A New Orleans native, Carol attended the University of New Orleans, where she earned a Master’s degree in Fine Arts, graduating Phi Kappa Phi, and was a Graduate Teaching Assistant. She established two Art programs, Ganus High School in 1979 and the University of Holy Cross in 1987. She worked as a teacher, a sculptor, married and raised her family while continuing to perfect artistic techniques in paint, and colored pencils. Her vibrant use of color conveys an emotional impact in her work. She began to be noticed and was included in Treasures: 72 Colored Pencil Masterworks from Around the World. In Louisiana Art Walk, her work was referred to as “Points of Brilliance.”

Named Professor Emeritus, in 2018, by the University of Holy Cross, Carol has been the recipient of three Endowed Professorships. UHC commissioned her to create two mural size paintings and eight drawings. These are on permanent display. Carol received the Outstanding Faculty Award for 2018. She was also honored with the “Dedication” for the UHC’s Literary Magazine, Calliope.

In 2009, Jean Bragg Gallery of the Southern Art proudly started displaying her work because of its uncommon style, expertise, and artistic versatility. In 2016, the gallery changed ownership and is now, Gallery 600 Julia St. The gallery featured her work in several one-person shows, Crystallography, 2011, Finite and Infinite, 2016, Pop Rock, 2017, Full Throttle, 2019, Color Rhapsody, 2021and, The Golden Afternoon, 2022.

In addition to painting in the traditional medium, she is one of artist who has elevated colored pencil to a fine artform. The Colored Pencil Society of America recognized her contribution to this singular medium by choosing her for the Outstanding Recognition Award for its 19th International Exhibition. In 2014, this organization elected Carol to CPSA, Signature Status and in 2016, CPX, Signature Status.

In 2013, the New Orleans Art Council selected her work for purchase by the city, to become part of their permanent collection. Carol has also served on the board and as Vice President of the Women’s Caucus for Art – Louisiana Chapter. The National WCA selected her work for their Best of 2014 showing in Chicago’s ARC Gallery and the 2014 Calendar. Kathleen Deshotel of the Advocate said Scott’s Art was “a standout… the art becomes even more stunning in detail and beauty.” In December of 2014, her work was accepted in the 118th Exhibition for the Catherine Lorillard Wolfe Art Club on Broadway in New York. In April 2016, she received an invitation from the Alden B. Dow Museum of Science and Art in Midland Michigan to participate in the exhibition, Reflections and Illusions. Manhattan Arts International, “The Healing Power of ART 2016” awarded her 2nd Place.  Artsy Shark selected her as a featured artist. The New Orleans Arts Council in partnership with Resource Bank awarded her a grant and three-month exhibition. In the New Orleans Art Association’s, National 2018, she won First Place, Honorable Mention in 2019, and merited Signature Status.  Carol Scott’s work has been shown in various exhibits, museums and collected throughout the country, including Chicago, New York, Los Angeles, and as far as Argentina. She has created a pantheon of over 600 works of art and participated in more than 300 shows.

In the spring of 2018, Carol retired from teaching, to spend her time as an Artist!